Vanquished, the first book in my Men of Roxbury House trilogy, released in France today! Retitled La Rose de Mayfair (literally: The Rose of Mayfair), the book has a fresh new cover to go with the re-imagined name.

And yes, mes amies, the book is in French!

Arguable French isn’t the only romance language that all but screams Le Sexe. Italian is pretty damned sexy, too. Speaking of which…

Vanquished and its other trilogy partner, Untamed, are slated to release in Italy later this year. I can’t wait to see what the bellas do with the cover art and yes, the titles.

For now, check out my interview with Les Romantiques, France’s hot new romance fic magazine similar to our beloved RT BookReviews. My interview appears on pages 20-21. If you don’t read French, you can at least enjoy the pretty, pretty pictures.

My July Victorian-set historical release, The Tutor is shipping from online retailers as well as showing up in selected brick-and-mortar stores–squee! I’ll be signing stock in New York City stores over the coming week and posting a list here on my blog for readers living in or visiting The Big Apple, so please check back. In the meantime, check out the excerpt and, if you haven’t already, take a few moments and enter my contest. 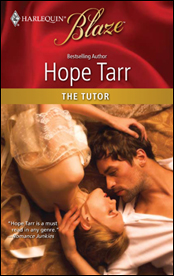 I’ll also be reading The Tutor and signing copies at the July 5th Lady Jane’s Salon, so if your Fourth of July holiday plans bring you into the New York City area, please consider joining us.Â  We have a jam-packed evening with three other great guest authors: Toni McGee Causey, Dianna Love, and Colby Hodge AKA Cindy Holby.