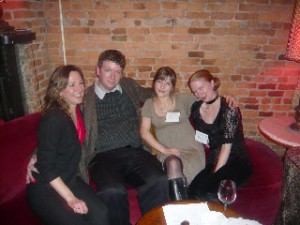 Award-winning author, Andrea Pickens got the party started by reading from The Scarlet Spy, the latest in herÂ Regency-set historical series about a plucky group of young women trained as espionage agents. After a short break, during which Andrea and I signed our books, I read from Every Breath You Take…,my latest Harlequin contemporary release.

Last but not least, we made moneyÂ for the cause as well as collected a cache of fabulous romance novels to be distributed to womenÂ working to achieveÂ their own Happily Ever After beginnings. If that’s not sharing the love, I don’t know what is.

Next month’s Lady Jane’s Salon will take place on Monday,Â March 2nd, 7-9 PM at Madame X with romance authors Lauren Willig and Jenna Petersen as our guest readers. If you’re in Manhattan or passing through, I hope you’ll consider putting Lady Jane’s on yourÂ calendar.

Once upon a time three romance authors and one blogger went out in Manhattan after attending one of the city’s many literary reading series. Amidst the pungent aroma of cigars and single-malt scotch the conversation turned to the sadÂ fact thatÂ there exists no reading forum for romance fiction in Manhattan, the seat of the publishing kingdom. And that struck us–oops, them–as really rather sad.

Then one of the romance writers, we’ll call her Princess Maya, got this gleam in her eye. All, well, gleamy-eyed, she looked ’round the Round Table (okay, it was a booth, but…), drew a deep breath, and announced, “Jeepers, let’s start a romance reading series of our very own!”

Okay, she didn’t actually say “jeepers.” I’m totally making that part upÂ but the rest, for sure, is right on the money. And within that 30Â seconds or so of yes, sheer brilliance,Â Lady Jane was born.

Co-sponsored by Share the Love and Beatrice.com and co-founded by Maya Rodale, Ron Hogan, Leanna Renee Hieber, and yes, Moi, Lady Jane’s Salon is Manhattan’s first (and so far only)Â reading series devoted to romance fiction. The Salon will meet on the first Monday of every month startingÂ February 2nd, 7-9 PM at the uber swank Madame X lounge in Tribeca.

The program format will be two author readers per evening with a short break between and a Q&A gab fest finale. Andrea Pickens and Yours Truly will be getting the party startedÂ in February; future authors TBA.

Admission is one gently-used romance novel or $5, your pick. All proceeds will benefit Share The Love, a non-profit organization that distributes gently-used romance novels to groups assisting women-in-transition. That we get to read our books and share the possibility ofÂ Happily Ever AfterÂ beginnings with women working to build hopeful, independentÂ livesÂ is more than the best of both worlds. It’sÂ the stuff of whichÂ real life fairytales are made.

For directions and otherÂ delicious details, please check out my Media and Events page. And for more juicy behind-the-scenes scoopage, please plan to stop by our live chat this Sunday, January 25th atÂ Romance Novel TV.

I’m coming off a solid weekend–seriously solid. Even better, it started early, on Thursday when I met up with fellow Harlequin author Wendy Etherington for drinks and then a Nascar-sponsoredÂ concert at theÂ Hard Rock. Wendy writes for Harlequin’s Nascar-themed series, and sheÂ rolled into town to take part in the Nascar cross-promotional festivities, including a book signing. What I know about Nascar, aboutÂ racing period,Â could fit into a thimble with room to spare. Fortunately for meÂ Wendy is a fab teacher, and I’m a quick study. And having music mega-starÂ Gavin DeGraw play a private concert for Nascar royalty and well, us in the Hard Rock’s auditorium while we stoodÂ stageside was well, way cool.

Next stop on the Fun Train: Kennedy’s, an iconic Midtown Irish pub and restaurant, for Romance Writers of America/NYC’s annual holiday brunch. Over eggs and mimosas, I caught up with Scandalous Woman and outgoing RWA/NYC prez, Elizabeth Kerri Mahon, DeeÂ Davis, andÂ others, including one member’s adorable four-month old baby,Â Jack.

A quick refresh, includingÂ “costume” change, and then it was back out to the Upper West Side’sÂ Dive BarÂ for bookseller buddy, Stacey Agdern’s birthday. The putin–a heap of fries layered with gravy and topped with lots of gloppy good melted cheese–was delish and the cosmo wasn’t bad, either.

I departed the Dive Bar with the Rebels of Romance, Liz Maverick and Marianne Mancusi amidst the season’s first snow. Even wearing open-toed platform pumps–what was I thinking?–I found myself getting caught up in Liz’sÂ winter wonderland enthusiasm. Still, by the time we reached our next stop, The Brass Monkey in the uber trendy Meatpacking District, I was more than happy to settle inside, have a drink, and thaw.

Soon it was time to move on again to the signature event of the night, The Bowie BallÂ at Santos Party House in Tribeca. NamedÂ after glitter rock legend David Bowie, theÂ ball is an homage to the 1980’s music and fashion scene. Between sets of classic 80’s dance tunes, we took in the stage show where drag queens, retro bands, and burlesque dancers literally rocked the house.

Today, Sunday, I dialed it down a notch and attended the New York Public Library’s holiday open house. The library is always lovely,Â butÂ decked out in holiday splendor it wasÂ positively breathtaking.Â Face painting, puppet show,Â stilt walkers, and costumed actors kept kids of all agesÂ thoroughly entertained.Â Music provided by groups suchÂ as the Brooklyn Youth Chorus andÂ a Santa suited brass bandÂ put us all in the holiday spirit.

On the way home, I squeezedÂ in some not-so-early Christmas shopping and thenÂ stopped in at one of my favorite restaurants for aÂ glass of vino and a bowl of lobster bisque. FinallyÂ it was home againÂ where hungry cats and neglected fictional charactersÂ awaited me.

What cool stuff did you do this weekend?

It’s fall in New York, I’m telling you. The temperatures may not be appreciably cooler than they were pre-Labor Day, but autumn has landed in the Big Apple in a big way. At precisely 9:00 AM on Tuesday, September 2nd, an invisible switch was flipped back to “on,” putting the sleepy summer to bed and powering the city to life again. The line outside the West Village’s Magnolia Bakery is once again winding up 11th Street, clothing boutiques are thronged with Manhattanites jonesing to wear uber cool winter clothes and boots even though it’s still in the 80’s, and the vibe on the streets is once more high on flow, low on ebb.

Earlier in the week, I checked out The Brandy Library with fellow author–and intrepid social ethnographer–Liz Maverick and our friend, Bonni. If I had to settle on one word to sum up the Brandy Library it would be “civilized.” Unlike so many Manhattan watering holes, here you can claim a seat at the back lit bar or one of the banquette style tables, order your aperitif, and savor it for hours. Located in the heart of Tribeca, The Brandy Library boasts an impressive array of not only brandies but classic cocktails, cognacs and single-malt scotches. If you’re bored, you can even quiz the bartender, Jason, on the origins of your libation. If he doesn’t know the answer, he’ll look it up–really, he will.

Last night I attended a shared Virgo birthday party at Slate Plus, a sleek after hours club in Manhattan’s West Village. The music was a mix of 80’s, 90’s and contemporary Top 40, rap and hip hop; the ambiance spartanly elegant; and the clientele…styling.

I rounded out the weekend with a maiden shopping expedition to Zabar’s in search of some gourmet grub. The iconoclastic Manhattan food emporium has occupied its Upper West Side location at Broadway & 80th for seventy years–and counting. I went at peak on a Sunday because a) I was in the hood having lunch with a friend and b) after seven months in the city, I was getting tired of moving the Zabar’s gift certificate, a housewarming gift from friends Mike and Lisa, every time I dusted my dresser.

Going to Zabar’s for the first time on a Sunday constitutes a maverick move, somewhere between boldness and stupidity. To say it was a little bit crowded would be like saying super model Heidi Klume is a little bit pretty. The narrow aisles were stuffed to the point of thrumming. More than once I found myself manuevering around shoppers who’d suddenly slammed on the brakes mid-step to sample the free noshes. I couldn’t blame them.

Trekking $100 bucks worth of perishables back downtown wasn’t exactly a cheesecake and marble rye walk, but strappy soul that I am, I managed. My usually empty singleton refrigerator is now stocked with gourmet meals-to-go: Black Angus flank steak, poached salmon in dill, baked macaroni and cheese, and spinach souffle. For a person used to scrounging for scraps come week’s end, one who’s been known to make a meal of a jar of olives or a microwaveable bag of Orville’s best–hey, it’s all about the pairings–all this bounty is well…a little overwhelming.

September 5th was the kick-off to Fashion Week AKA Mercedes-Benz Fashion Week, a semi-annual event held in New York City with events staged in Bryant Park and other areas throughout the city. The collections being shown are the Spring 2009 lines, of course. In the rag biz, fall is, strictly speaking, a done deal, then again they don’t call it “fashion forward” for nothing. 😉 I’ll be calling in my reports from the catwalk…right after I finish this piece of Zabar’s cheesecake.

If the Shoe Fits…